PHP vs. HTML is a hot topic among rookie developers.

If you are confused in understanding the difference between both the languages, don’t worry, I’m here to help you resolve your confusion today.

In this article, I will talk about all the key differences between PHP & HTML. So stick around till the end because you are going to learn something new today.

Let’s not waste any time further and jump right into the article!

HTML, aka HyperText Markup Language, is one of the oldest and the most used language to create beautiful looking front-end web pages.

The language is easy to learn and gives you the power to create anything you want. Every website on the web is built using HTML because it’s one of the three core components on the web, including CSS and JavaScript.

HTML makes use of “tags” which tells the browser how to show specific pieces of text on the screen. Not only text, but you can also add images, hyperlinks, division, etc.

Tim Berners-Lee created HTML in 1991 who is also the founder of the World Wide Web.

PHP, aka Hypertext Pre-processor, is an open-source server-side scripting language that is majorly used to create dynamic web pages.

Nowadays, the majority of the sites that you see on the web, their backend coding is done in PHP. Anything related to information change is written in PHP which loads before the web page is displayed to the end-user.

PHP language can be used for performing calculations, establishing database connectivity and anything that need to perform logical coding can be achieved using PHP.

It is still the most popular scripting language which can be further used for command-line scripting and desktop application development.

In this section, I will make an in-depth comparison between PHP and HTML and show you all the major differences between them. Let’s get right into it!

Before we get into the details, check out this image to understand the differences between PHP, HTML, and CSS briefly. 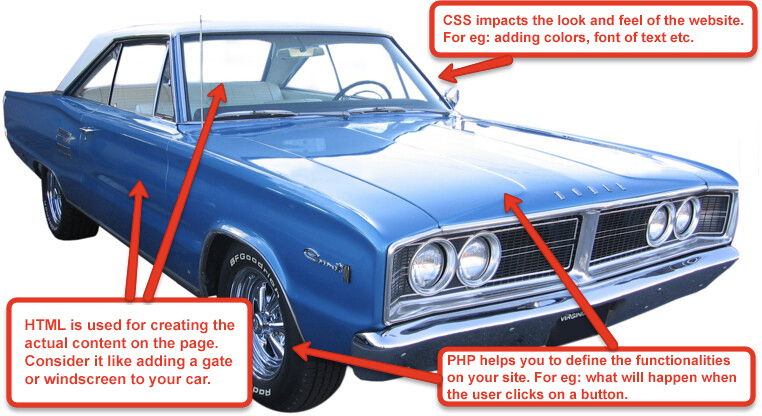 HTML as previously mentioned is a Hypertext Mark-up Language which is the backbone of your site’s front-end. On the other hand, PHP is a scripting language used to create interactive, dynamic and static websites and web applications.

HTML is used as a client-side language, whereas PHP is a server-side scripting language.

Learning HTML is as simple as eating a piece of cake. Even if you make mistakes in using the right tags, HTML will automatically adjust in most of the cases.

However, that’s not exactly the case with PHP, because although being easy to learn the language, PHP is strict if you make any mistakes while writing the code due to which takes longer for you to master PHP compared to HTML.

Both HTML & PHP can integrate with AJAX to create dynamic websites. However, with HTML, you can create dynamic front-end pages whereas, with PHP, you can establish a connection with a different database such as MySQL, Oracle, etc.

HTML is used for inserting hyperlinks, text formatting, redirection, adding colors and everything that has to do with page designing.

PHP, on the other hand, is used for logical coding like sending out emails, creating registration and login forms, file uploads and establishing database connections.

In terms of compatibility, there’s not a lot to talk about as both the programming languages supports almost all the major browsers like Chrome, Firefox, Safari and many more.

Code type is one of the major difference between HTML and. PHP. In HTML, all your code remains static – meaning you’ll only see the elements that are written for the front-end.

On the other hand, in PHP, all the code is dynamic in which the output varies depending on the type of browser you use.

Although both the languages serve a completely different purpose, they do match in some of the aspects.

PHP and HTML are both completely different languages and I hope by now you might have understood all the key differences between both the languages.

If you have any doubts between PHP vs. HTML comparison, feel free to drop a comment below and let us know. We will be more than happy to help you out.

The editorial team at MyThemeShop consists of a group of highly trained WordPress professionals who strive to deliver nothing but excellence.

Are you looking for a reliable easy to use migration plugin to move your website from one host to another? You are at the right place. Moving WordPress websites... Read More

WordPress is an amazing platform which enables you to change the design of your website according to your need. Be it the widgets, footer, or the menus of the... Read More

If you pay attention to the media, you’ll hear about sites getting hacked all the time. Usually, it seems to happen to large organizations, like banks, e-commerce companies, and... Read More

Enter the e-mail you used in your MyThemeShop profile. A password reset link will be sent to you by email.